by MikeHawk
It's a clone of Sega's 1990 Columns in QuickBASIC. It has both the "original" and "flash" game modes, and supports joystick. It also features all the blocks from the Game Gear version. It's been tested under DOSBox (around 1500 cycles) and on a 18 years old laptop (Intel Celeron M 1.50Ghz running Windows XP SP3, so that's also DOS emulation) and works fine. It only uses PC Speakers for sound/music (S to switch or turn off) because I'm dead certain my previous programs couldn't run on genuine hardware due to my crappy SoundBlaster code. 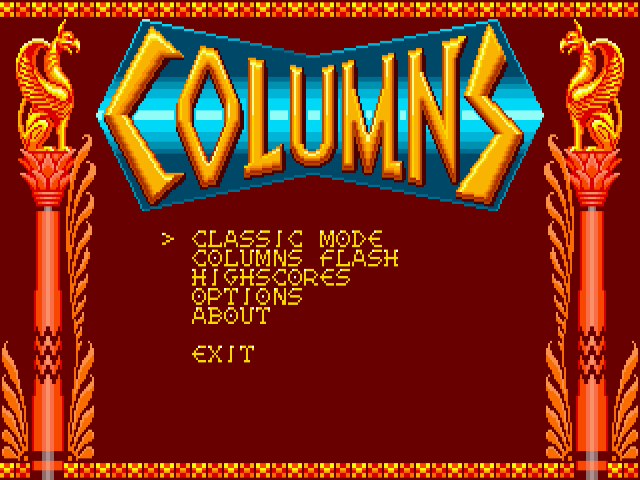 It should work.
Fingers crossed.
(All sources included as usual.)

by Erik
Wow! This is some incredible work. That looks and plays fantastic! It's been many years since I last played Columns so I don't know if it's in the original but I did like the grace period when the column lands where you can quickly still switch the jewels around or slide it to the side. It was especially helpful once the speed really gets going.

I used the in-game screenshot function to capture my game over high score: 81,910 @ lvl 14 starting with Novice Level 0. (I had to convert it to png because this forum doesn't seem to like bmp attachments)

by MikeHawk
Thanks!
Yes, the short delay before the column is placed was in the original game. I got some things close enough (holding the down arrow key increases the score like it does on the Genesis, but there's a one point difference because I didn't pay attention to the delay before cementing the column,) and others not so much (I learned later that diagonals are supposed to give more points than vertical or horizontal streaks.) The speed is also not the same. It seems there's a different set of rules and scoring according to the game mode, it's all very confusing.

Also, I checked out your QB website. What a blast from the past! I love seeing a throwback style of website in this day and age.